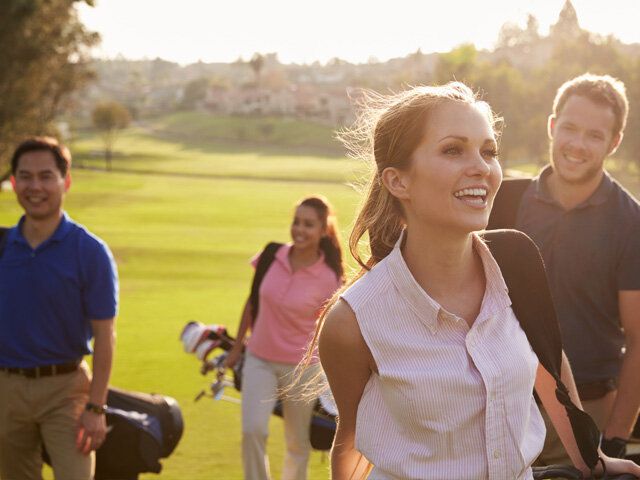 Texas has over 750 courses that are right up your alley

Golf isn’t just a sport. A hobby. Or a pastime. For some, it’s a way of life. This grand state has many heavenly sets of holes that are destinations you’ll want to take on. From manicured seaside greener-than-green greens, to roughs with a few cacti making things a bit prickly for you, the variety of Texas golf resorts is a powerful draw. The seven regions of Texas each have their own unique and diverse collection of courses, and with an overall average of 245 days of sunshine a year, golfers can hit the green all year round. For a list of courses and more information on golfing in Texas visit these websites:

Big Bend Country
Settle into the wide open spaces of Big Bend, where the blue skies are bigger and desert plains stretch as far as the eye can see.  Just one round in West Texas and you’ll realize why the region that spans from Midland in the east to El Paso in the west and down the Chihuahuan Desert into Big Bend National Park is the hidden gem of Texas Golf.

Gulf Coast
Sunshine, warm weather, and of course, an abundance of tree-lined courses comprise the Gulf Coast region.  A region that is a beacon for great food, fine art and cultural touchstones, and a wide array of diverse golf courses.

Hill Country
The Texas Hill Country is known for many things: rolling hills, endless fields of bluebonnets, and the best barbecue in the world.  Strangers to Central Texas may be surprised to find that some of the country’s best golf courses are nestled smack dab in the middle of the state.

Panhandle Plains
Texas’s most unique region is easy on both the eyes and the wallet.  You’ll be “as big a Texan” as anyone at the top of the Panhandle on that Amarillo highway, where the abundance of authentically Texan honky-tonks, golf courses, and small-town charm rivals that of anywhere in the state.

Piney Woods
The small towns of East Texas are serious golf-adventurer’s dream.  Starting in Lindale and stretching to the Louisiana border is the Azalea Golf Trail, a line of public courses in charming spots like Gladewater, Lake Paletine, and Longview, where you’ll enjoy a relaxed atmosphere, tufts of the titular blooming azalea shrub and some of the best-designed courses in the state at a price that’ll leave room for more than a couple Lone Stars at the local watering hole.

Prairies & Lakes
America’s Team and other world champion professional clubs, world-class shopping, and fine dining as far as the eye can see abound in and around the Big D.  And though the Prairies & Lakes region is defined by the expansive Dallas-Fort Worth Metroplex and its vast multitude of stay-and-play options, historic country clubs, and pre-war munis, North Texas has so much more to offer.

South Texas Plains
Why is South Texas home to some of the greatest golf and vacation spots in the country?  How much time do you have?  Year-round warm weather.  Authentic Mexican cuisine and world-class fine dining.  Affordable courses set against the backdrop of mature live oaks and expansive ranchlands.  The list goes on.