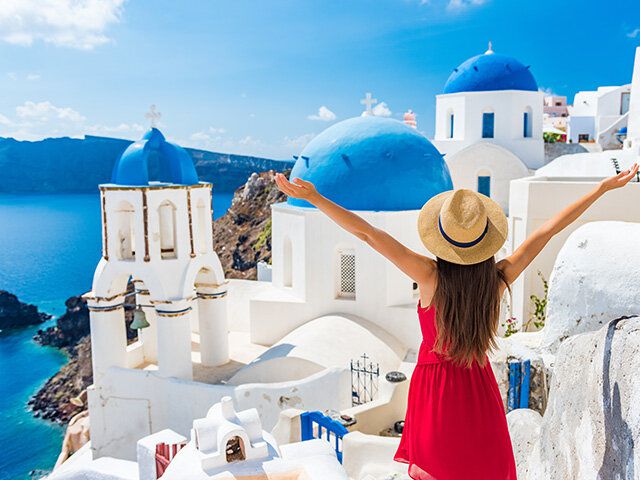 The Tube (aka The Underground) in London

1) See London from the Thames Cable Car: Take in views of landmarks such as the Thames Barrier, the Canary Wharf and the Olympic Park, before ending your journey near the O2 Arena entertainment complex. 2) Kensington Gardens: Stroll through one of London’s 8 Royal Parks and spot famous attractions like Kensington Palace, the Peter Pan Statue and the Diana, Princess of Wales Memorial Playground. 3) The Tube: Not only is the Tube an essential part of getting around the UK capital, it is also the world’s first underground railway system. A few words of caution before use: Plan your Tube journey out beforehand and avoid using it during rush hour if you can.

4) Sunset at Montmartre: For the best sunset in town, take a seat somewhere on Montmartre hill or on the steps of the Sacré Coeur Basilica that sits at its summit. 5) Parc de la Villette: The third largest park in Paris offers plenty of things to keep you busy, including museums, theatre, concert halls, live performances and 26 architectural follies (decorative monuments). 6) Berthillon ice cream on Île Saint-Louis: Berthillon’s artisanal ice cream and sorbets are iconic in Paris and come in flavours like lavender and strawberry daiquiri. In summer, get a taste of the real deal at the manufacturer’s original location, La Maison Berthillon, on Île Saint-Louis.

7) La Boqueria: Walking along Las Ramblas in the Ciutat Vella, you will eventually stumble upon the Mercat de Sant Josep de la Boqueria (aka La Boqueria), one of Europe’s largest food markets. Its grand iron entrance leads to a colourful world of fruit, vegetables, meat, fish and seafood stands, as well as popular tapas bars like El Quim. 8) Gaudí: Antoni Gaudí, a famous architect who practiced Catalan Modernism, left his mark absolutely everywhere in Barcelona. His most famous work consists of the Gothic and Art Nouveau-style La Sagrada Familia, as well as Park Guell. 9) The Beach: Any cosmopolitan city with a beach is a winner in our books. Two of Barcelona’s most popular beaches are bustling La Barceloneta Beach and Nova Icaria Beach.

10) Eating a wood-oven pizza in a piazza:  A piazza, Italian for public square, is a place where people convene, socialize and dine. One of the best things to eat in a piazza is a thin, crispy Roman-style pizza. They are sold al taglio (by the slice) and popular options include the margherita (tomato, mozzarella and basil) and the capricciosa (a sort of all-dressed pizza). 11) Colosseum: It would be a crime to go to Rome and not see the Colosseum, a place that housed public spectacles, gladiator contests and re-enactments of famous battles. 12) Vatican Museums: These museums within the Vatican City house some of the most renowned Renaissance artwork in the world and are a must if you are in Rome. The Sistine Chapel ceiling, the Raphael Rooms and the Borgia Apartments are among highlights.

13) Promenade des Anglais: Offering exquisite views of the Bay of Angels and lined with several cafes, this stunning promenade is best experienced by either strolling, jogging or cycling along. 14) A day at the beach: While Nice’s pebble beaches may not be easy on the feet, they are definitely a pleasant sight for the eyes and are a must when on the Côte d’Azur. Nice is also home to sandy beaches like Villefranche, as well as private beaches like Lido Beach. 15) Day trip toMonaco: Just 20 km from Nice is Monaco, the French Riviera’s glamourous sovereign city state. Browse ritzy boutiques, awe at expensive yachts and make a stop at the Monte Carlo Casino.

16) Pour the perfect pint of Guinness: If you find yourself drinking a pint of Guinness in a Dublin pub, you’ll quickly realize that pouring the stuff is considered a local art form. The Guinness Storehouse is an excellent place to master the pour and you’ll even receive a certificate once you’ve successfully done so! 17) Stroll through Trinity College: In addition to admiring Trinity College’s awe-inspiring architecture and gardens, you must pop into the Old Library to see the Book of Kells, a world-famous illuminated manuscript from 800 AD that contains the four Gospels of the New Testament. 18) Abbey Theatre: Also known as the National Theatre of Ireland, this theatre was the first state-subsidized, English language theatre and was home to many writers of the Irish Literary Revival. It remains active to this day and is a fantastic place to see a play.

19) See Grand Place at night: One of the prettiest sights in Brussels is the Grand Place, when it is lit up at night. This is the city’s central square that houses gothic-style guildhalls, Town Hall and the Breadhouse. 20) Eat Belgian waffles and fries: Waffles and fries are staples in Belgian gastronomy. Waffles are best eaten with Belgian chocolate drizzled on top and come in 2 variations –the Liege waffle (a dense, rounded waffle) and the Brussels waffle (a lighter, rectangular-shaped waffle). Fries here are well-loved for their extra crispiness (they are fried twice) and for the variety of sauces you can dip them in (the sauce andalouse is a local favourite). 21) Brussels’ Comic Book Route: As the birthplace of comic strips, Brussels is home to a Comic Book Route, a series of murals that feature characters from popular Belgian comics like Gaston and The Adventures of Tintin.

The Acropolis in Athens

22) The Acropolis: You can’t go all the way to Athens and not see the famous ancient citadel of a powerful civilization. In addition to seeing the remains of buildings like the Parthenon and marvelling at the skilled use of marble, you must experience the view of Athens from the top of the hill. 23) Lounge around at Thissio Square: For even more outstanding views, head to Thissio Square. From here, you can sip a coffee at an outdoor café while gazing at the Acropolis and Lycabettus Hill. 24) Browse the farmers’ markets: Each neighborhood in Athens has its own farmer’s market (or laiki) which takes place once a week. Get your pick of the freshest fruit, veggies and fish, or other things like kitchenware and flowers.

25) Beer Gardens: As soon as temperatures warm up in March, Munich residents flock to the city’s large chestnut gardens to socialize over beer. These gardens are set up with tables and benches and typically seat a few thousand people. You can try one that is affiliated to a restaurant or find a BYOB garden. 26) Starnberger See is the closest lake to Munich city centre and offers activities like swimming, sailing and surfing. 27) Sleeping Beauty Castle: Neuschwanstein Castle is a nineteenth-century castle nestled on a hilltop, which was used as inspiration for Disneyland’s Sleeping Beauty castle. It is best done as a day trip from Munich and for something extra magical, take a horse-drawn carriage up the surrounding hillsides.

28) Take the trams and elevators: This is one of the best and easiest ways to navigate through the narrow, cobblestone streets of Lisbon. Make sure to take tram number 28 through the historic district and the Santa Justa Elevator, which offers a fantastic view of Lisbon up at the top. 29) Awe at world treasures: If there are any two monuments you should see in Lisbon they would be the Jeronimos Monastery and the Belem Tower, which date from the time of great Portuguese explorers like Magellan and Vasco da Gama. 30) Listen to Fado: Fado music is considered the soul of Portugal and the best places to hear it are in the historical district of Alfama. Popular casas de Fado (Fado houses) include Casa de Linhares and Pateo de Alfama.